BA3 the last of the barbarian radiers. The base marked in the same way as the other ones with "Prince August BA3". I tried to give him the look of an ordinary rank and file spearman without any fancy shield design and colourful clothing. 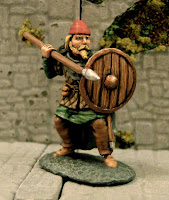 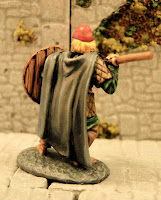 Next one up is the Viking Berserker BA2. I tried to do a bit of free hand work on the shield but otherwise noting special. But this miniature might be responsible for some of the confusion regarding different product codes used by PA for the figures.
In the No. 3 catalogue it was listed as Viking berserker CH9 but the miniature that bears the mark CH9 is a cleric. The cleric is listed as CH10 in the same old catalogue. The problem continued and the female adventurer CH10 was labelled CH11 and on top of that the halflings (how were later sold in a pac of two as CH12) were listed separately as CH12 and CH13. This ment that there is no CH11 miniature. My guess is that this is the reason behind the unknown CH11 miniature which some collectors are looking for.

A sense of scale

Heres a pic showing one of the many oddities of PA's fantasy miniature range. As you can see, there is three distinctly different scales of miniatures. They were all part of the friends & foes range. But the masters for the figures were made att different time and I suspect by different sculptors.

The ghoul is part of the first range of fantasy moulds released by PA back in 1983, and today called the classic fantasy armies moulds. The man-at-arms were released as part of the later series of fantasy moulds and has a different design for it's base. This particular base design was only used for the men-at-arms (mould 674) and the orc artillery crew (mould 672). They are also taller then the older figures but at the same time shorter and less detailed then the later ones.

I don't know of any other miniature ranges by other manufacturers that have sculpts that are so different that the miniatures don't work well together. To me it looks like PA didn't have a well thought out plan when they started to release their fantasy line. And as time past they tried to alter there products to compete in different markets. First fantasy roll playing, then fantasy wargaming and then back to roll playing and finally a last attempt to break in to the wargaming market with the Fantasy Command concept.

Next up is the barbarian chieftain BA1. This particular miniature is a home cast from the starter kit 12006. The casting turned out quit well and it shows how hard it can be to tell the difference between cast and home cast miniatures. The easiest way is to look at the markings on the base. The cast ones have a product code and the home cast have the abbreviation PAM and a copy right C as well as a year. On this figure the base marking is "© PAM 85" for example.

The main problem with home cast figures is mould lines. You have to spent a lot more time removing them and particular where the ingate metal pice is attached. But it's a fun and rewarding process when the miniature is finally done.

I also tried out a few new painting techniques and use of different types of paint. All the metal was done with enamels and the rest with artist oils over acrylics. The result could have been better, but the artist oils are a specially hard to master.

Here is the last of the villagers from the Friends & Foes miniature range. The Blacksmith like the juggler in the previous post was also a part of the celtic boxed set, and it's marked in the same way on the bottom of the base i.e. "Prince August LC9".

The VL3 juggler miniature was originally released as part of a boxed set of figures for a french RPG called Légendes Celtiques and it has it's own product code, LC8 market on it's base. The figure was named L'amuseur (entertainer) in the original box.
This time I tried my hands on painting a tartan pattern on the trousers, but the result was less then great. Next time I will do the squares larger. 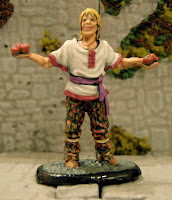 As mention in previews posts the sculptor Chris Tubb is re-sculpting the figures from the Fantasy Armies range. He now has a website from which you can order the figures directly using Paypal (as well as helping him save on Ebay fees). He recently released new sculpts of the Half-Orc Thief (CH29) and the Female Magician (CH37).